Eating Away at Earth

How agriculture and consumption of animals shapes the planet

Cattle are visible at a feedlot in Summerfield, Texas, USA. Globally, we processed 355 million tons of animal meat in 2018 and much of it was beef. The lagoon seen at the top of this feedlot gets is glowing color from a high concentration of manure and chemicals. Source imagery: Maxar. 34.717873°, -102.506723°

If humans had not domesticated animals more than 12,000 years ago, we would undoubtedly look like a different species today. Doing so allowed us to settle and grow our civilizations, develop our early economies, and over many generations, even changed our physiology. It also has transformed the animals themselves, taming wild boars into pigs, wild cattle into cows, and fowl into chickens. Perhaps most profound, though, is the impact of animal domestication on the environment.

The 20th century saw massive changes in how we raise livestock, use by-products, slaughter, and consume. Decades of industrialization, animal science, and farm research have enabled us to grow larger animals, house them by the thousands, process their meat faster, cheaper, and in massive quantities. As a result, access to and demand for meat has never been greater. Earth’s human population has more than doubled in the last 50 years, but the amount of meat we produce has more than quadrupled — 355 million tons of animal meat was processed in 2018.

Today, more than 90% of Earth’s large animals are domesticated, and while some are raised as household pets or work animals, most are farmed for food. Globally, there are at least 1 billion pigs, 1 billion sheep, 1.5 billion cows, and 23 billion chickens alive, a vast majority of which are raised for slaughter on concentrated animal feed operations, or factory farms. And as demand for meat and other animal products continues to grow, expanding factory farms are tapping out Earth’s water resources, overtaking its land, and polluting the atmosphere and oceans.

Agricultural villages surround the Euphrates River in the Abu Kamal District of Syria. This area is part of the “Fertile Crescent” — a large region spanning parts of present-day Iraq, Syria, Lebanon, Israel, Palestine, Jordan and Egypt — where settled farming first emerged more than 10,000 years ago. In addition to plants like figs, peas, lentils and chickpeas, this region domesticated animals including cattle, sheep, goats, pigs, cats and geese. Source imagery: Maxar. 34.826110°, 40.623241°

When you think about ways to conserve freshwater, you probably imagine taking shorter showers, being conservative around the house, or maybe changing how you water your garden. But what about altering your diet? Most of us probably wouldn’t, despite the fact that consumption of animal products is one of the most water-wasting activities we engage in.

According to National Geographic, “of the less than 1 percent of freshwater available for human use, a whopping 70 percent goes toward growing food and raising animals.” And while plant-based foods do require water to produce, animal products, by far, place the most strain on our water supply. One pound of wheat requires 132 gallons of water to produce, while one pound of beef requires nearly 14 times that — 1,799 gallons, which includes irrigation of grains and grasses for feed, plus water for drinking and processing. This problem is exacerbated as farms expand and attempt to grow animal feed crops in deserts or other areas where there is no natural water source.

NASA’s GRACE satellite mission, which tracked trends in freshwater from 2002 to 2016, showed numerous areas where drastic water depletion is already occurring around the globe. Scientists believe water shortage will be the key environmental challenge of this century, especially as Earth’s population is projected to exceed 10 billion by 2050. 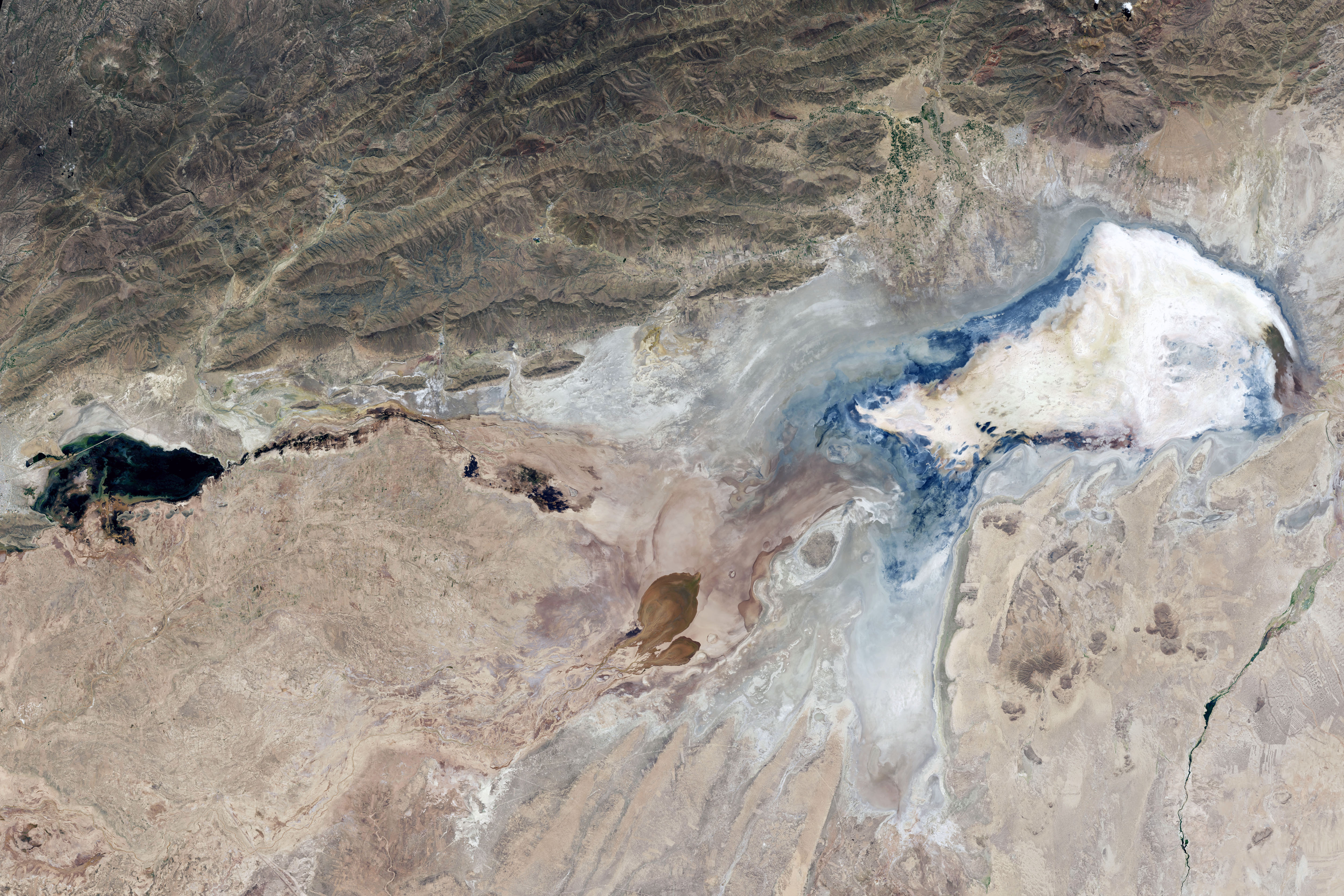 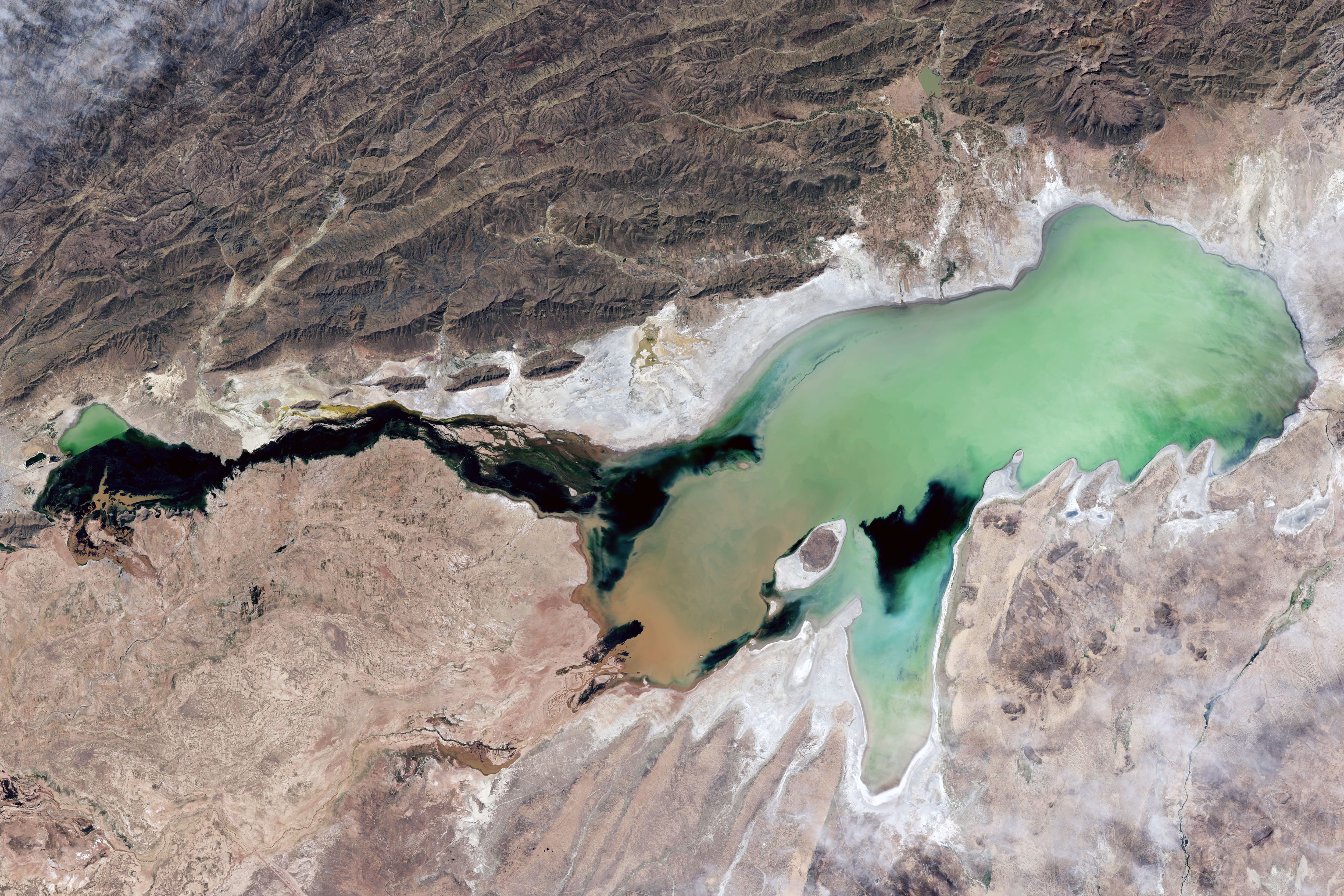 Lake Poopó is a saline lake in the Altiplano Mountains of Bolivia. At peak water levels, it covered roughly 390 square miles (1,000 square km) and was the second-largest lake in the country, but now it is almost completely dried up. Scientists believe that diversion of the lake’s waters for agriculture and mining played a large role in its decline. These images show Lake Poopó holding water in April 2013 and nearly empty in January 2016. Source imagery: NASA. -18.550000°, -67.083333°

As demand for meat grows, area used for cattle grazing is expanding to cover more of Earth’s surface, infringing on natural lands and straining our soil. Beef production causes millions of acres of deforestation every year, most notably in South America, where nearly 4 million acres of tropical forest was cleared for pastures in Brazil in 2011 alone. In 2019, just over 2.2 million acres of the Amazon rainforest burned as a result of slash-and-burn clearing methods to make way for livestock farming.

Deforestation of this scale contributes to global warming, biodiversity loss, and soil erosion. In fact, if we continue to farm as we currently are, the United Nations estimates all of the world’s topsoil could be gone in less than 60 years. And even if topsoil remains, we would eventually run out of land. If the rest of the world begins eating as much meat as the top meat-eating countries — Australia, USA, Israel, and Argentina, to name a few — we would need to use every square inch of Earth to raise and feed animals.

Deforestation in Bolivia has primarily been driven by the expansion of mechanized agriculture and cattle ranching. It is seen here in Santa Cruz, immediately adjacent to untouched tracts of forest. Source imagery: Maxar. -17.387750°, -60.562130°

Globally, agriculture generates 24% of all greenhouse-gas emissions — more than all forms of transportation combined. These emissions come from farming equipment, which put out carbon dioxide, and from the animals themselves, which produce methane. Fertilizers and other chemicals used on farms also release harmful pollutants into the atmosphere. In the United States, for instance, farms cause more than 90% of all airborne ammonia pollution.

Often times, agricultural pollutants runoff into waterways, contaminating our drinking water and causing harmful algae blooms and “aquatic dead zones.” According to NASA, these dead zones — “where the deep water is so low in dissolved oxygen that sea creatures can’t survive — have grown explosively in the past half-century,” not coincidentally downstream of fertilizer-laden fields. Agricultural pollution of our seas and waterways is not just caused by runoff, either. Aquaculture, with new industrial-scale fish farms, has expanded about 14-fold since 1980. Just like with beef and chicken, the rapid increase in demand for seafood has caused the aquaculture industry to cut corners leading to the destruction of aquatic habitats.

So What Happens Now?

Food is cultural, personal, and significant to many of us — as is farming — and that can make change difficult. Nevertheless, humans need to be mindful of how the foods we eat, particularly animal products, impact our planet. Some may choose vegetarian or vegan lifestyles, but others can make an impact by simply limiting their intake of meat to a few days a week. A recent study by Scientific Reports found that, if everyone in the U.S. reduced meat consumption by 25%, we would save about 82 million tons of greenhouse gas emissions per year. A rise in companies making plant-based meat alternatives may help accelerate that reduction.

If we were to reduce how much meat we eat, farms could respond by tapering meat production and diversifying with more fruits, vegetables and grains for human consumption. In the meantime, there are other things farms can do to reduce their impact on our environment. Using more efficient irrigation practices, such as drip and micro-sprinklers, can reduce water use by as much as 70%. To curb emissions, some farms have begun using digesters to turn methane from food waste and manure into electricity, cutting their carbon footprint and power bills all at once. Governments of all sizes should partner with farms on these endeavors, incentivizing green projects while penalizing irresponsible practices.

How we move forward as a planet is largely in our hands as consumers. One thing is for sure — our relationship with domesticated animals made us who we are today, but if we don’t make significant change, it also will threaten who we are tomorrow.