Moving Away From ‘Peak Car’

Cars are parked next to the Hyundai production facility in Montgomery, Alabama, USA. The plant has an annual capacity of 300,000 automobiles and also contains the production facility for their engines. In 2019, more than 17 million cars and light trucks were sold in the United States, a number that has been surpassed consecutively for the last five years. /// Source imagery: Nearmap / 32.281981°, -86.328442°

Automobiles make up 70% of the emissions from all forms of transportation. There are an estimated 1 billion cars on the planet, with around 80 million new cars sold each year. Despite continually strong sales, experts suggest we have reached ‘Peak Car’ - meaning the average distance traveled per person in cars has peaked, and will continue to fall over time. There are many different factors contributing to this trend, such as a global shift towards urban living, new forms of mobility, new government policies for reducing traffic, and a slowing expansion of road networks.

The Judge Harry Pregerson Interchange is a 130-foot-tall (40 m) stack interchange near the Athens and Watts communities of Los Angeles, California. It is formed by the intersection of Interstate 105 (Glenn M. Anderson Freeway) and Interstate 110 (Harbor Freeway). The city of Los Angeles, very much planned as an ‘automobile city,’ has some of the worst traffic in the United States. /// Source imagery: Maxar Technologies / 33.928917°, -118.280583°

Evidence of a Peak

Signs of Peak Car have been observed in several developed countries -- the United States, Germany, Japan, UK, Australia to name a few. Cities in these countries were mostly built to facilitate easy movement of cars – an urban design concept known as ‘Automotive cities.’ Changes in behaviors around driving will certainly influence how future cities will be designed and evolve in these countries. Yet if ‘peak car’ is to happen globally, developing countries must also adopt a different relationship with car ownership as their transportation infrastructure improves, income levels rise, and it becomes easier to purchase cars. 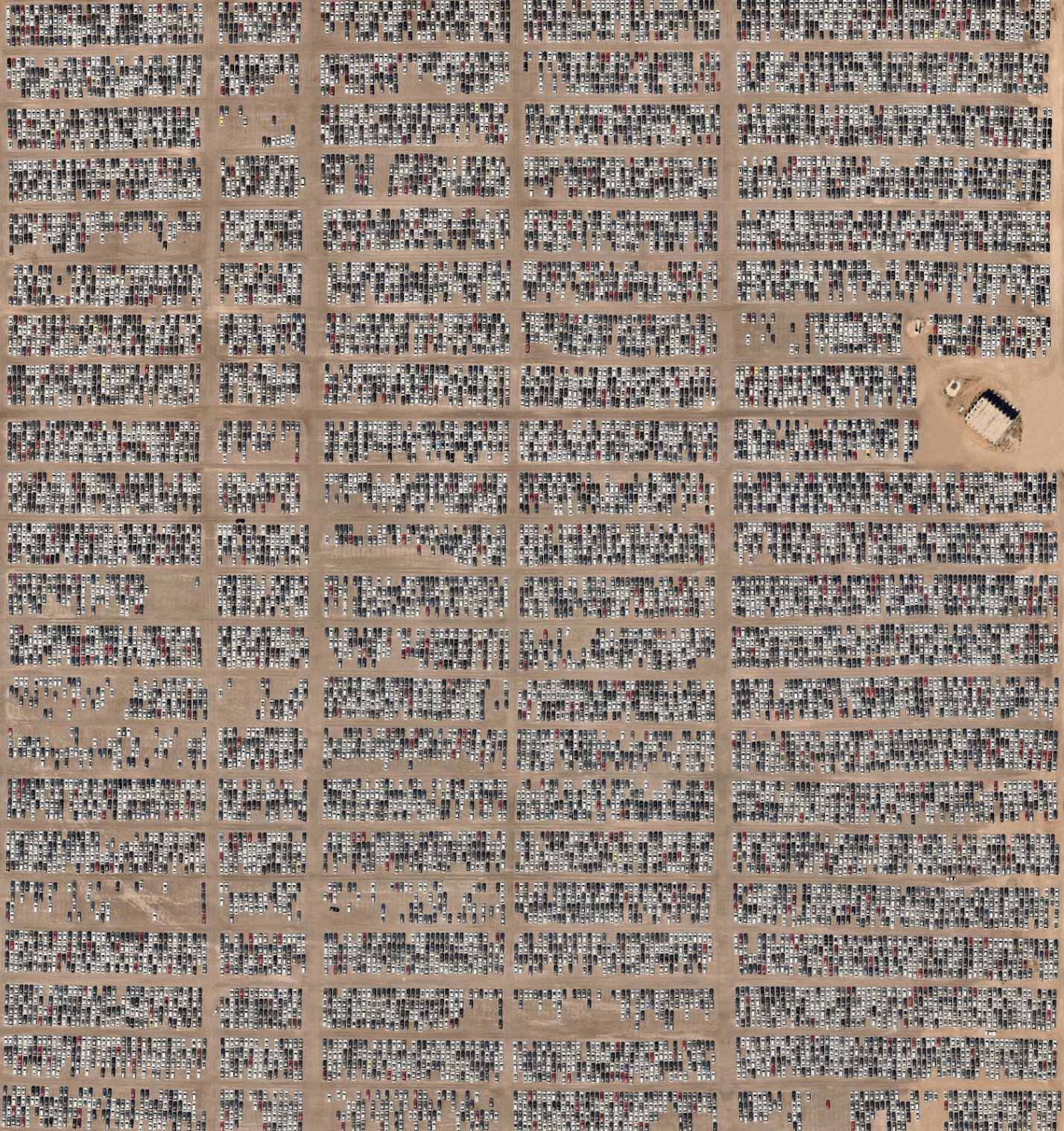 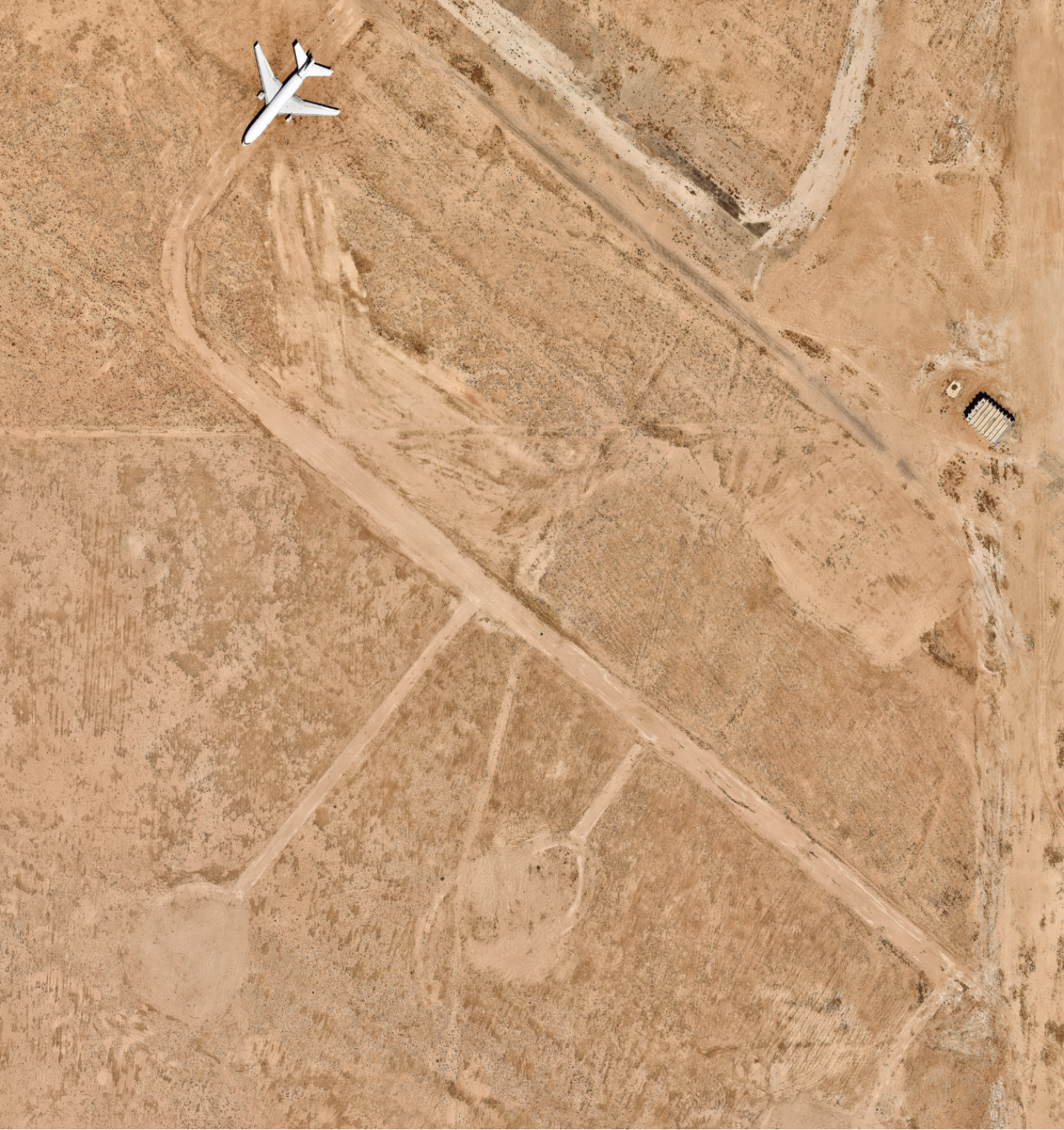 Thousands of diesel-powered Volkswagens are parked at Southern California Logistics Airport in Victorville, California. While this facility is usually used as a graveyard for retired airplanes, Volkswagen leased enough land here to park 21,000 vehicles. Following an emissions scandal in 2015, the company gave customers the option to sell their cars back to the company. The cars involved in the scandal were designed to only turn on emissions controls during testing, not during normal operation, emitting up to 40 times more nitrous oxide (one of the most potent greenhouse gases) into the air. Of the 500,000 cars involved, more than 350,000 customers elected to return their vehicles. They will continue to sit in locations like this one until they have been repaired or approved for export. /// Source Imagery: Nearmap / 34.597500°, -117.383056°

Cars produce higher greenhouse gas emissions per mile than other forms of transportation, especially when there’s only one passenger per vehicle. Reducing car usage and creating alternative means of moving around, such as public transportation should be a priority around the world. Yet it is clear that moving in a more sustainable direction will be a challenge as our needs and infrastructure to support cars has made them a mainstay of modern civilization. With more vehicles on the road, most drivers have experienced the frustrations of driving in densely populated areas.

Cars and trucks sit in bumper-to-bumper traffic along the EDSA Highway in Manila, Philippines. Manila is recognized as the densest city in the world and also has some of the worst traffic on the planet. In addition to its large population, the city lacks quality infrastructure or additional modes of reliable transport. Furthermore, laws that have been implemented to limit the number of cars on the road or to mitigate the city’s poor urban design are rarely followed. In total, 71% of the air pollution in the Philippines comes from automobiles and the dirty air that they produce has been considered a life-threatening problem to Manila’s 12 million residents. /// Source imagery: Maxar Technologies / 14.628830°, 121.046250°

From LA, to Moscow, to Manila, we can view traffic congestion and its consequences from above - LA loses $20 billion dollars a year in productivity due to time lost from those stuck on the roads, despite the city being constructed with cars in mind. Manila on the other hand, deals with some of the worst traffic in the world because it did not foresee its increasing urban density and how its population would adopt car travel as its primary means of transportation. Re-design of transit systems will be a necessity for cities moving forward. Building more public transportation infrastructure, bike lanes, sidewalks, and encouraging electric vehicle production should all be part of the solution if we are to reduce our environmental impact as we move around. 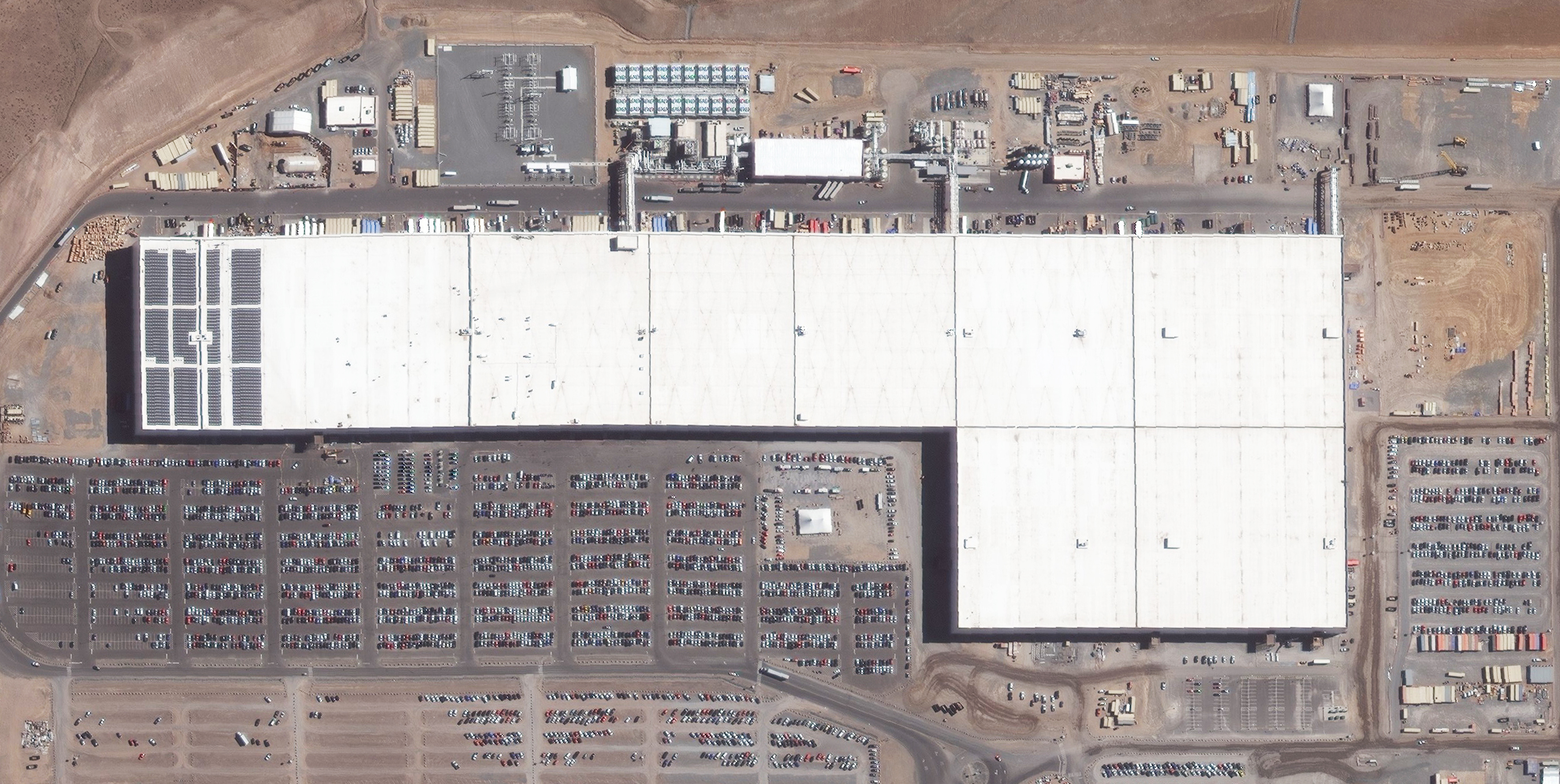 Opened in 2016, the Tesla Gigafactory is a lithium-ion battery and electric vehicle sub-assembly facility near Reno, Nevada. With plans to further expand the complex, the building is projected to have the largest footprint in the world, sprawling across 15 million square feet. When the facility operates at peak capacity, it produces more lithium-ion batteries in a year than the total amount produced in the entire world in 2013. /// Source imagery Maxar Technologies / 39.538016°, -119.441228°

The future of automobiles

The percentage of electric vehicles on the road continues to rise as more car manufacturers prioritize adding battery-powered options that have no emissions when in use. Companies like Tesla have constructed massive factories, such as the Gigafactory to meet rising EV demand (see it appear below). Total sales of electric vehicles globally was just 6,000 in 2009. Last year, the figure reached 2 million. We must also continue to build options for car mobility, which include carpooling, ride sharing, or vehicle sharing -- all of which decrease the need to purchase new vehicles. Our awareness of what is most efficient for us and sustainable for the planet should drive our choices about when, where and how we use our cars.