The Quiet Skies of COVID-19

Airplanes, including massive a380s from Singapore Airlines, are currently stored at Alice Springs Airport, in Australia’s Northern Territory. In total, the airline has grounded 138 out of its 147 aircraft worldwide during the COVID-19 pandemic. / -23.806944, 133.902222 / Source imagery by Nearmap

As the world struggled to understand and stem the rapid spread of the coronavirus this spring, human travel was quickly identified as a leading catalyst in the virus’ trans-border proliferation. Virtually overnight, air travel ground to a halt, with thousands of flights cancelled and airports—so often the hubs of international and domestic transportation—transformed into modern-day ghost towns. Europe alone saw a 90% decrease in airline capacity from April through June (compared to the same time period last year), and the aviation industry is estimating nearly $314 billion in revenue losses in 2020. That being said, traffic forecasts suggest the overall reduction in flights could lead to a 38% drop in carbon emissions from airplanes in 2020.

With significantly less flights operating, airline companies have had to address the unique problem of where to put all of the planes that would, in a normal year, be in the sky. Major airports have some storage capacity when it comes to grounded fleets, but with airlines like Delta, United, and American virtually cutting their flight numbers in half (American alone cancelled 30% of its domestic flights and 70% of its international flights into early May), many operators are looking to additional storage options. German operator Lufthansa had up to 700 of its 763 planes parked during the height of the pandemic’s first wave in April, with the company’s hub, Frankfurt Airport, setting aside one of its four runways to park dozens of Lufthansa planes. 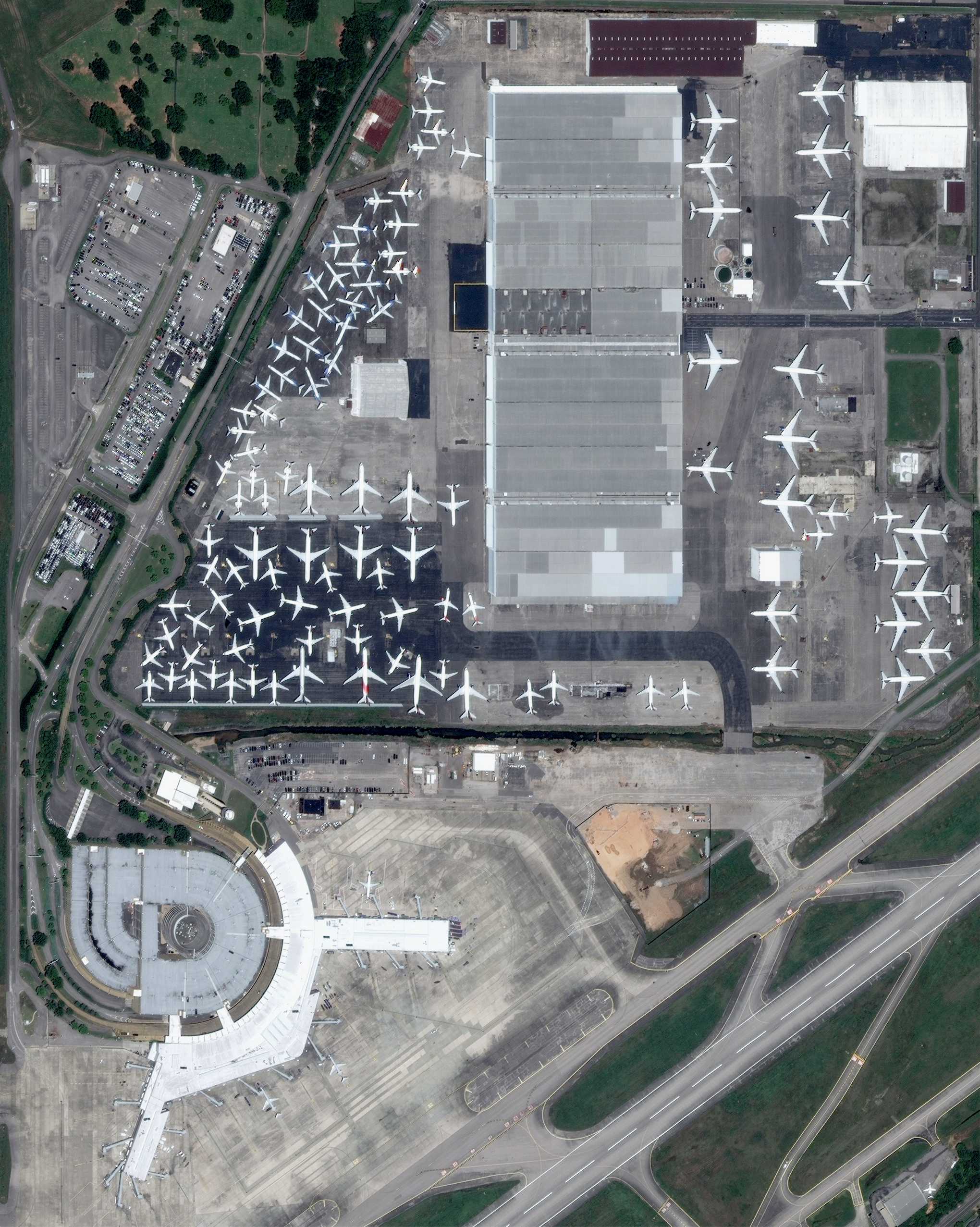 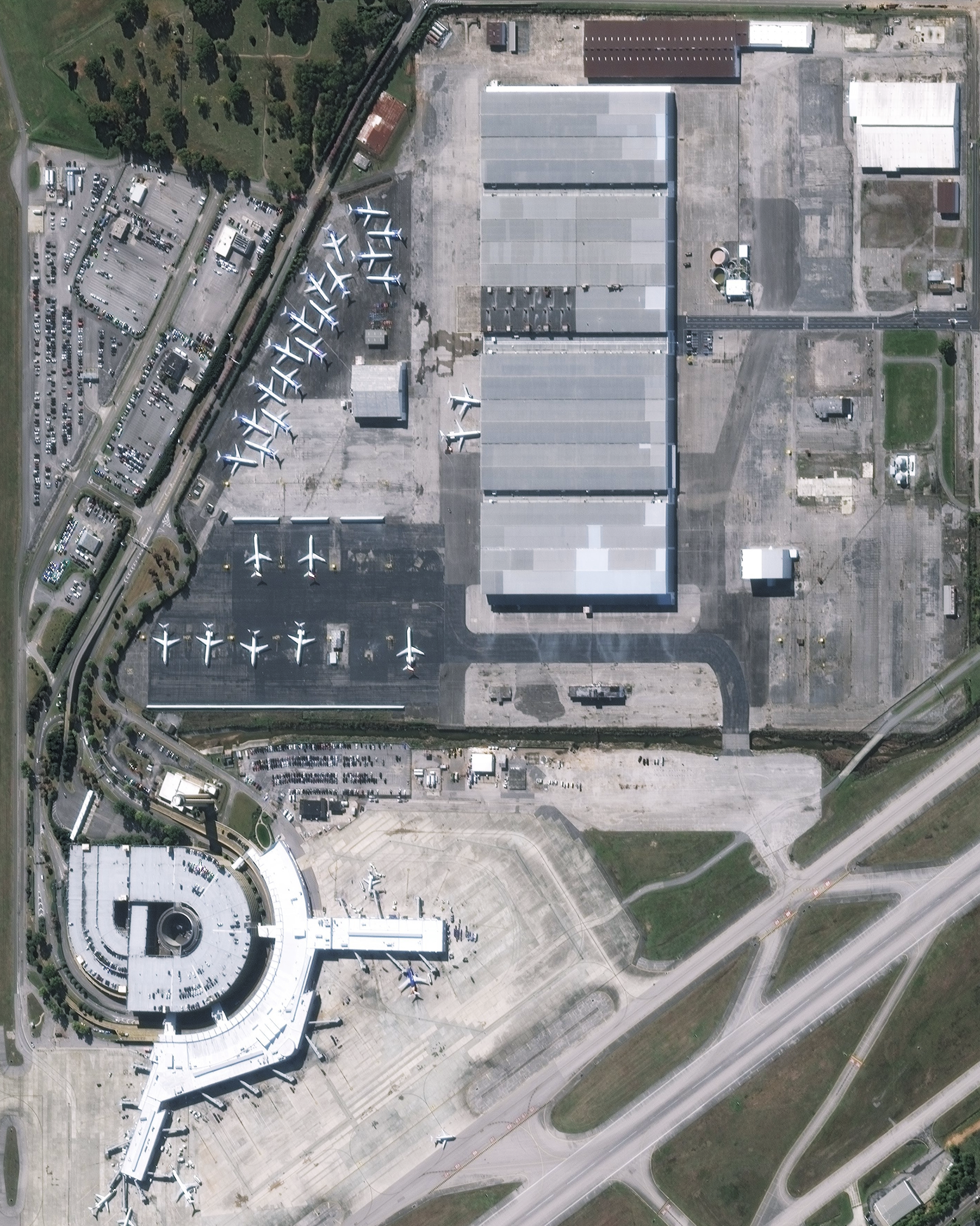 Alabama’s Birmingham-Shuttlesworth International Airport has become one of many airports handling the overflow of grounded planes around the U.S., storing upwards of 32 planes from Delta’s fleet alone. / Images from November 2019 and June 2020 / 33.562426, -86.754834 / Source imagery by Maxar

Before COVID-19, the US Federal Aviation Administration had designated a series of airports as unofficial storage facilities to reduce congestion at major airport hubs, referring to them as “Reliever Airports.” Some of these, like Arizona’s Marana Regional Airport, have been called into action during the pandemic, with Delta parking dozens of planes in the Arizona desert this spring. Delta also leased space at other airports like Alabama’s Birmingham-Shuttlesworth International Airport (seen above), where it stored an additional 32 planes. In total, the airline has grounded up to 650 planes of its 1,200-plane fleet during the pandemic, losing upwards of $50 million a day. 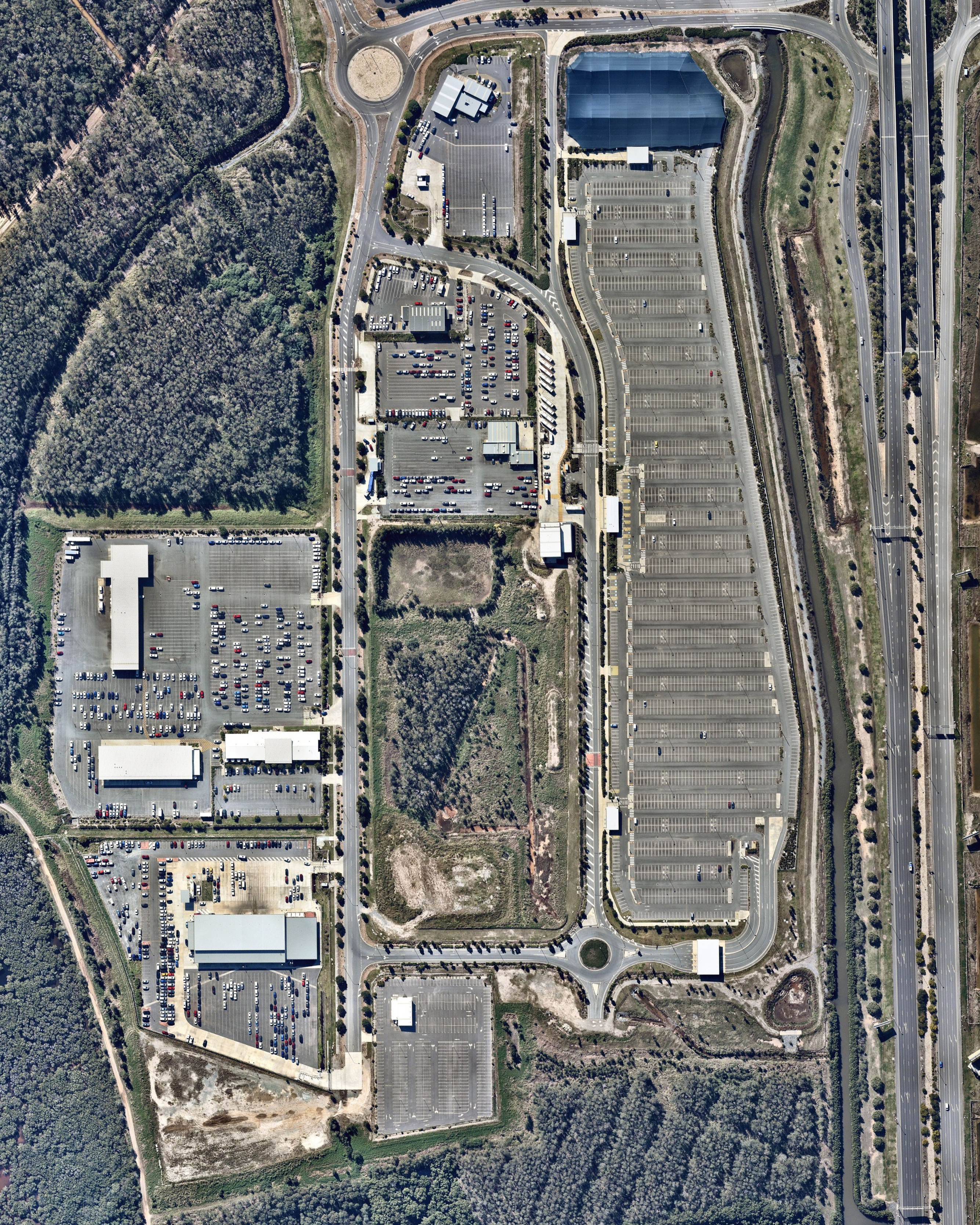 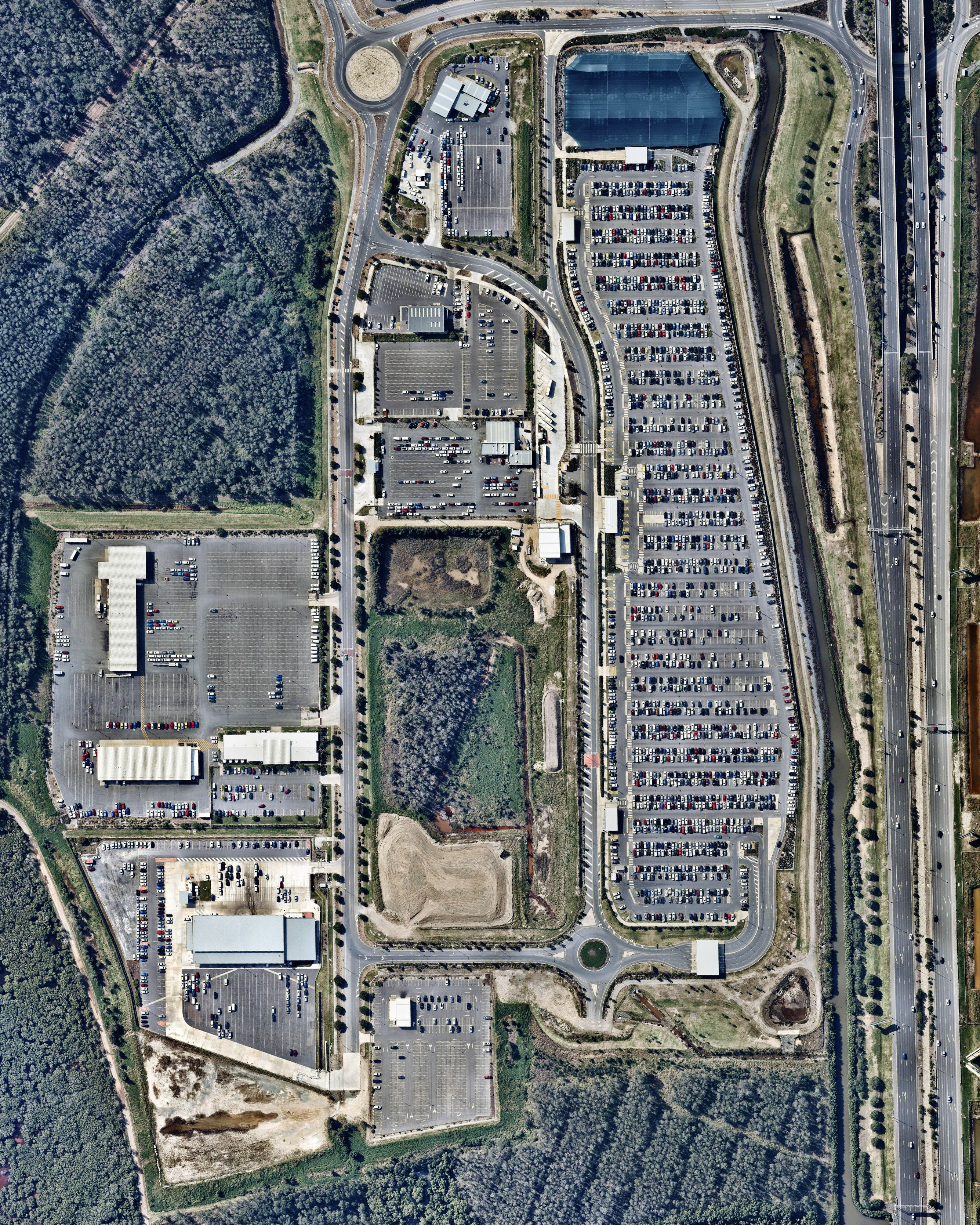 And though travel is still technically happening throughout much of the world, the way we travel has drastically changed. Long term parking lots, once packed to the brim by international business travelers and vacationers, have all but emptied out, with many parking operations around international airports closing down temporarily or shutting down for good. In Australia, a country that has nearly completely shut its borders to the outside world in order to curb the virus’ spread, Brisbane Airport has shut down its AIRPARK long term parking service, citing “impacts to travel” caused by COVID-19. The airport is the region’s primary international airport, its parking lots a symbol of the changing travel currents in the country and beyond.

Thousands of rental vehicles are currently parked at Angel Stadium in the Los Angeles, California metro area. With so few people traveling during the coronavirus pandemic, rental car companies have resorted to large-scale public venues as overflow parking for unused vehicles. / 33.800312, -117.884920 / Source imagery by Nearmap

Without a steady stream of incoming air travelers, rental car companies have also been hit hard, with major names like Hertz filing for bankruptcy early on in the pandemic and several major players hemorrhaging their fleets over a series of months. Just as airline operators are finding offsite parking for planes, rental car companies are seeking out large-scale public venues like pro baseball stadium parking lots (stadiums that are currently featuring fan-less games) to park unused vehicles. Rental car companies have also begun to sell cars at discounted prices to downsize their fleets and recoup financial losses in 2020.

As the world enters an uncertain fall and the looming possibility of a second wave of virus outbreaks, the troubles facing the travel industry may worsen before they get better, but one thing is for sure—our view of air travel may never be quite the same again.