The LNU Lightning Complex Fire, pictured here burning along the shores of Lake Berryessa, is actually the result of several lightning-sparked blazes combining over the last week to form one large blaze. The fire currently covers an area over twice the size of Chicago and is 33% contained as of publication. /// 38.598371, -122.273568 /// Source imagery by Planet

It’s fire season again in California, but 2020 is far from a typical reprise. In fact, an explosion of wildfires in recent weeks already has the state on the brink of its worst fire season in modern history. As of publication, Californian fires have destroyed over 1.4 million acres—nearly a million acres more than at the same point last year. Currently 625 fires are burning across the state (with over 7,000 reported in total this year), and the active SCU Complex and LNU Lightning Complex blazes are now the second and third largest California wildfires on record, respectively. Seven people have died, over 1,400 structures have been lost, and more than 100,000 people—including the entire University of California, Santa Cruz campus—have been evacuated.

But what makes this fire season particularly alarming is the combination of natural and manmade factors that have many climate experts saying these hazardous conditions will become the norm, rather than the exception.

A video captured by the GOES-17 weather satellite shows the wildfires burning across Northern California on August 20, producing smoke that has traveled as far east as Colorado. /// Video by NOAA, CIRA & RAMMB

To start, low precipitation in winter and spring (including the driest February on record) had already dried out the grass that fuels fast-moving fires. Combine that with the state posting one of its hottest months ever during a year that is on pace to be the hottest year ever recorded, and the stage was set for an above-average fire season.

The heat wave that swept triple-digit temperatures across the state (including an all-time record breaking 130-degree Fahrenheit day in Death Valley on Aug. 16) put a strain on the power grid, causing the state’s first rolling power outages in nearly 20 years and leaving more than 2 million people in the dark last week. But it’s important to understand that that record heat also brought about the conveyor belt of severe lightning storms, whose lightning strikes sparked about 585 fires in the past week alone. These storms—rare for this time of year—were caused by a high-pressure system sitting over Utah that is pushing air down into California and heating it up, creating what meteorologist Brian Garcia calls a “pressure cooker” effect.

A map of lightning strikes over the 24-hour period of Monday August 17 when unseasonable thunderstorms unleashed more than 7,000 strikes, causing over 500 fires across California. /// Source imagery by USDA

These thunderstorms have also produced strong, and often erratic winds, fueling the flames they created and spreading fires over massive distances. As the wildfires grow, the rising hot air begins to create its own weather, leading to a climate cascade, and events like a fire tornado that was seen near the town of Loyalton in Northern California. Increased winds coming off the wildfires have also made it difficult for wildland firefighters to get ahead of the blazes and have limited aircraft assistance. 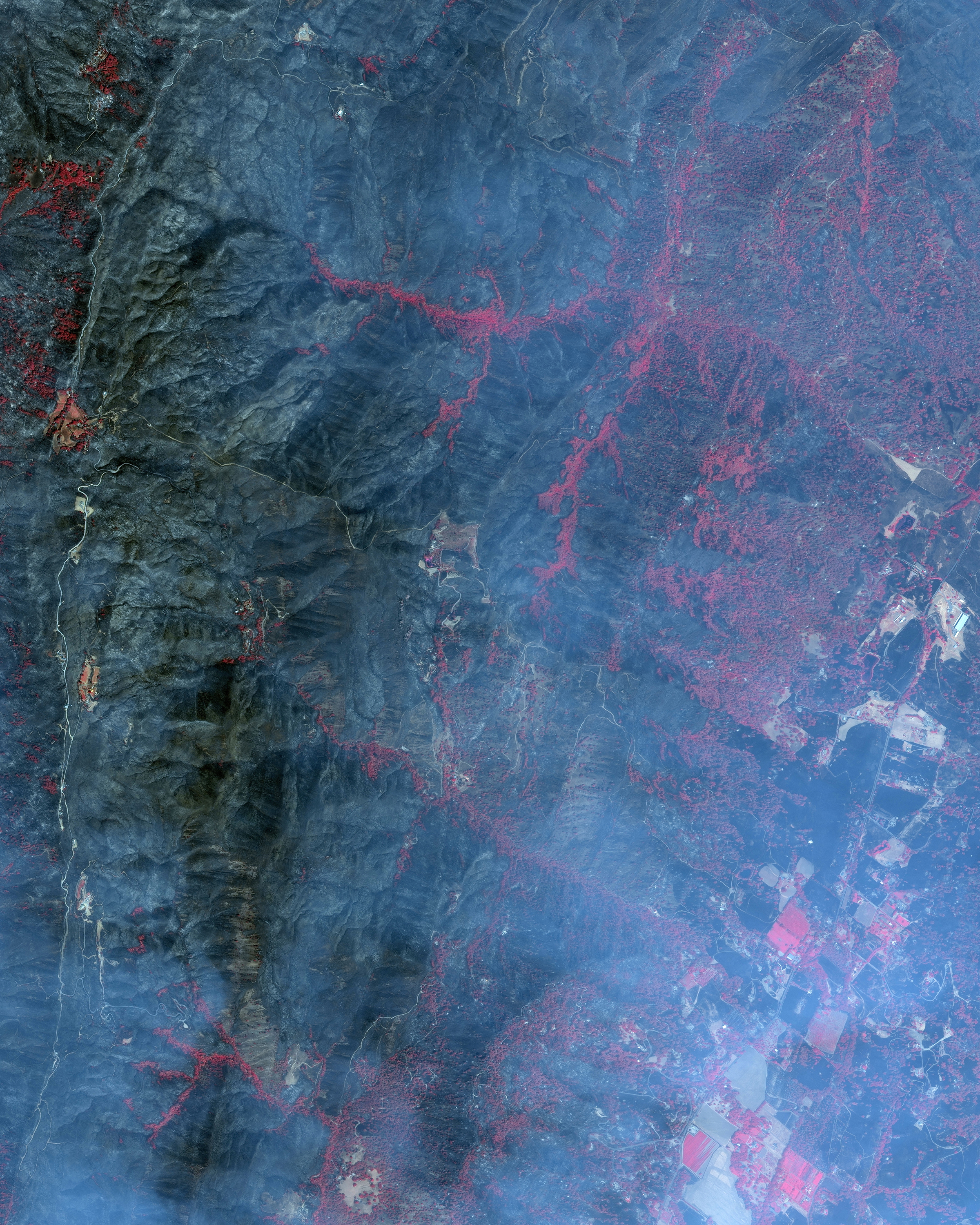 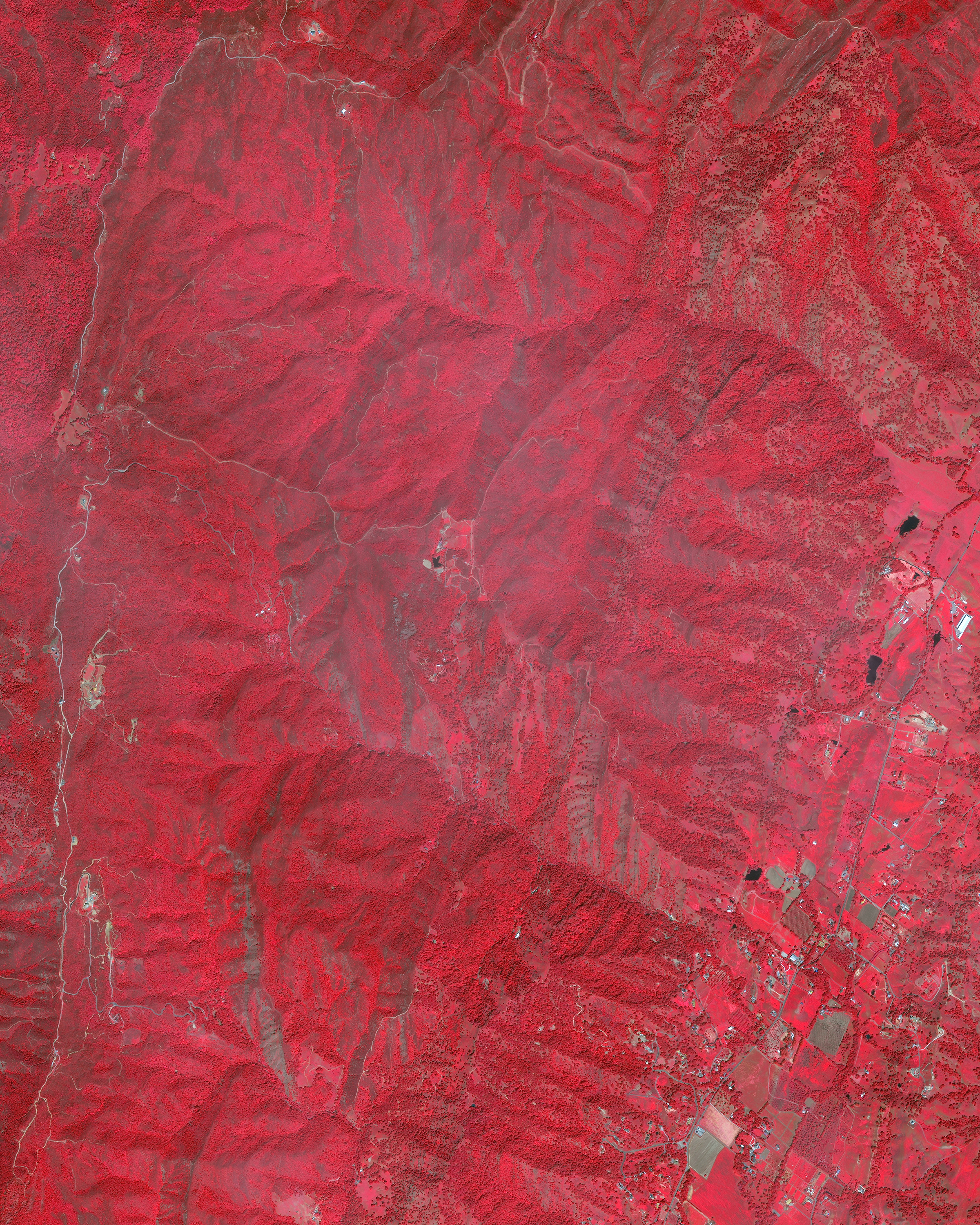 This before and after shows the Northern California town of Vacaville, where the LNU Lightning Complex Fire forced residents to flee in the middle of the night last week. Taken with an infrared satellite camera, the red denotes healthy, living forest before the blaze in April 2020, while the black and gray is dead, burned vegetation on August 23, 2020. /// 38.424446, -122.079930 /// Source imagery by Maxar

But that’s only part of the perfect storm burning throughout the state. These fires have arrived in the midst of a global pandemic, an event that has hindered California’s ability to fight the flames. For many years, California has relied on prison inmates to help battle wildfires, but much of that force was released from jail early in an attempt to mitigate the COVID-19 threat in state prisons. The prison firefighting population, which usually numbers nearly 3,400, was only at 1,306 as of this weekend.

All of this burning, especially in wet coastal areas, often kicks off a chain of events that adds to the devastation caused by the flames. Hillsides rely on root systems to keep land in place, but with many of those roots damaged or destroyed in a fire, steep land is more susceptible to landslides and mudslides. Less than a year after wildfires swept through Big Sur in the summer of 2016, the area suffered its largest landslide, piling six million tons of rock and dirt over a quarter mile section of Highway 1, knocking out the Pfeiffer Canyon Bridge, and closing the road for over a year. 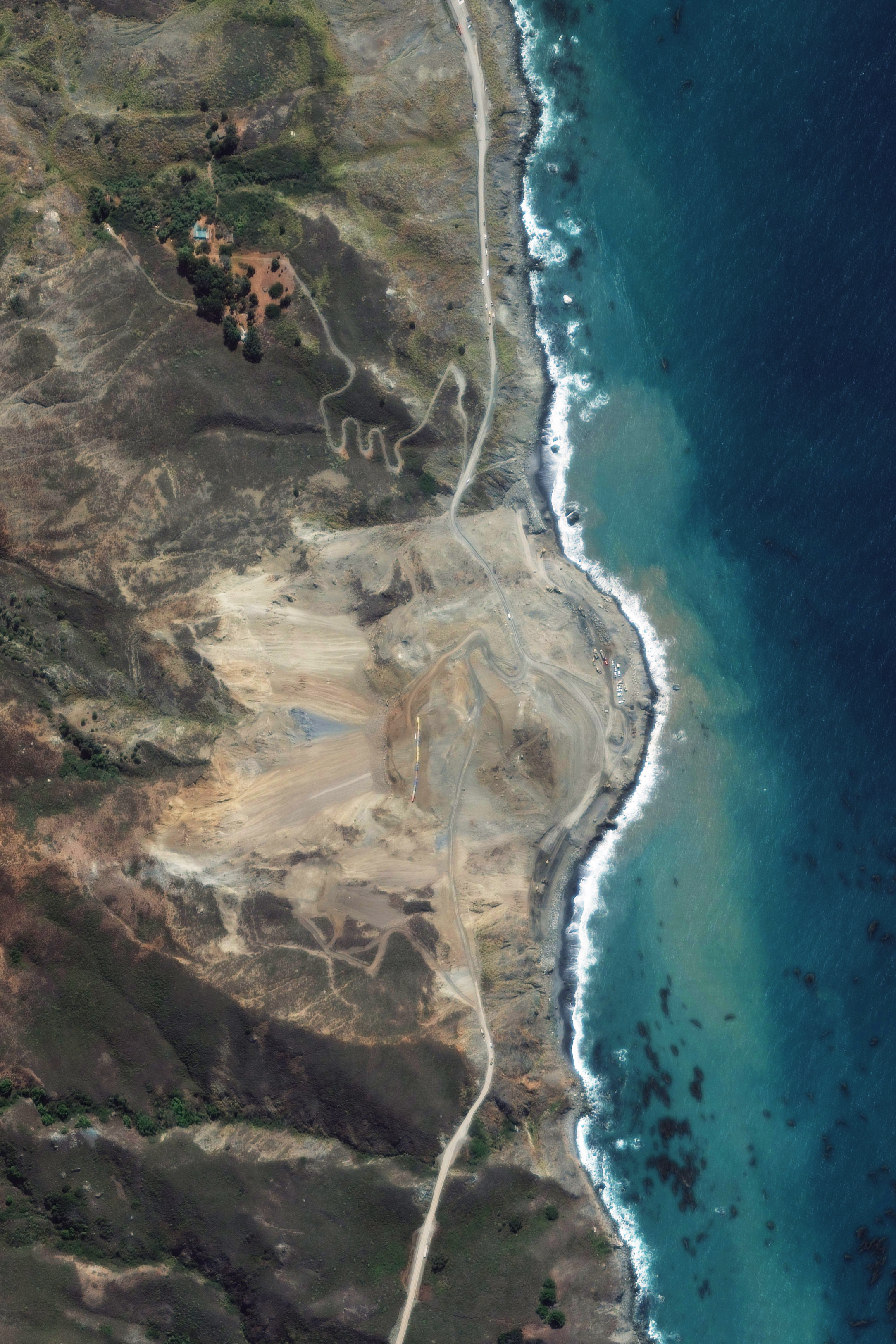 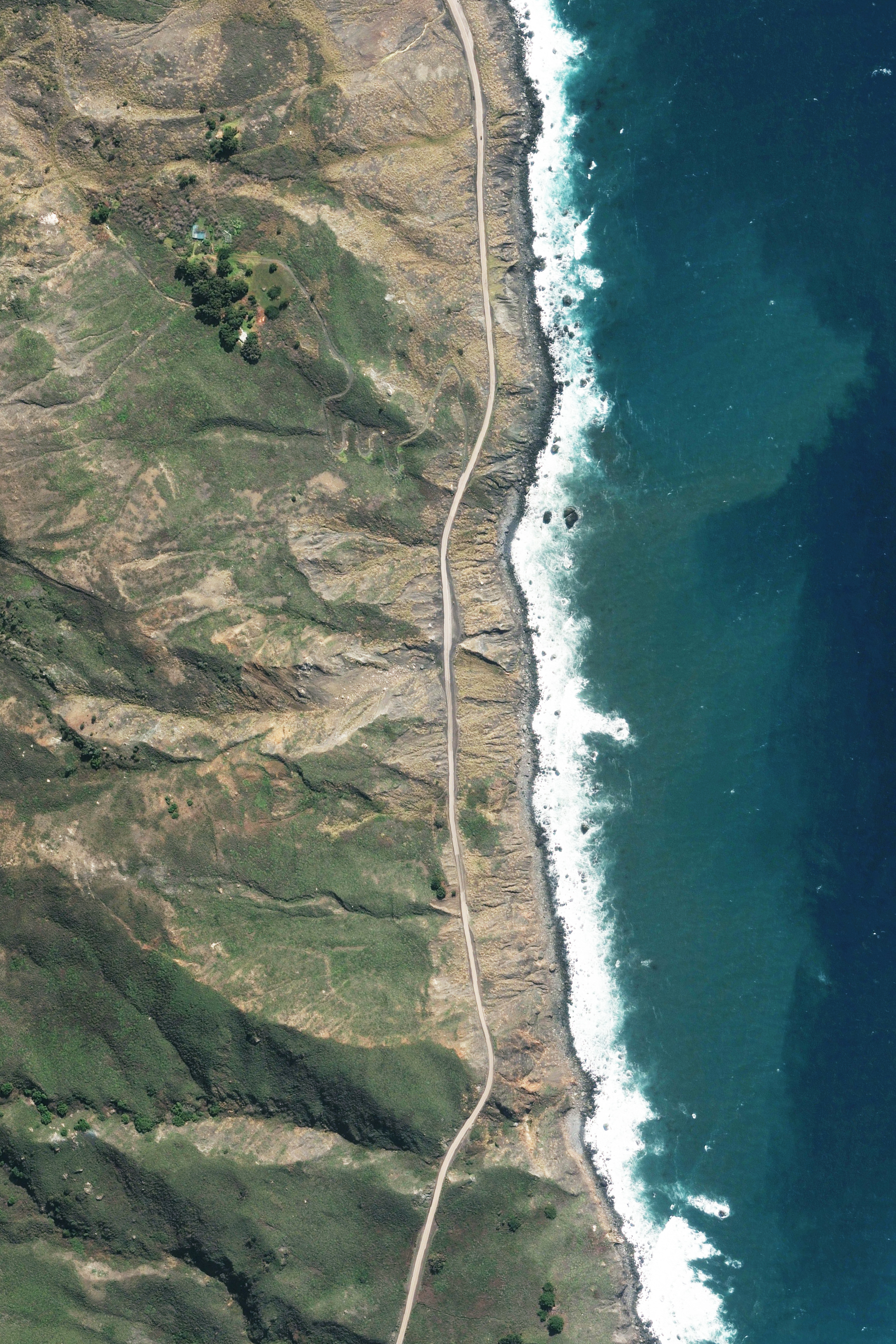 A landslide in Big Sur, California, caused by unusually heavy rains, following years of drought and fire, spilled six million tons of rock, dirt, and debris onto a quarter-mile section of Highway 1 and extended the coastline by 15 acres. Large wildfires destroy roots systems and limit groundwater absorption, leading to increased flooding and mudslides in burned areas. /// 35.863869, -121.441744 /// Source imagery by Maxar

These devastating fires are not limited merely to the Golden State. In the last year, we have watched Australia lose a record-setting 46 million acres to bushfires and Colorado is currently battling the second largest wildfire in its history. We haven’t yet seen the full extent of 2020’s historic fire season, but these events may well be the continuation of a much more disturbing trend, one that’s impact will affect us for years to come.